Henry and I have been having an excellent time adapting to the local culture; one thing that Berlin is known for is its gritty, underground, urban alternative lifestyle. We have been embracing that, getting amongst it all, and going wild.

Well, we've been doing the wild part at least.

Perhaps I'm more relaxed because we are on vacation. Or perhaps it's that I'm one of those mums who is so "relaxed" that I have let my child go feral.

To explain; today - most of the day, Henry pretty much got his own way.

First we went to the playground. It was all good until a big snow-dog style creature came galloping through the park; given my recent run-ins with dogs, I freaked out and so we left. 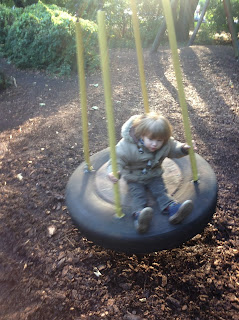 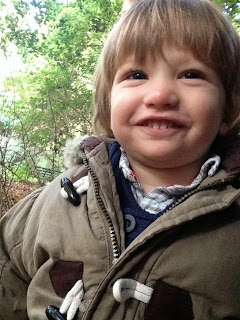 We went directly to look at the the toy department in KaDeWa.

We then had a lovely time when we met my friend Zoe. I'd explained to Henry that he needed to be on his best behaviour when we met mummy's friend. And he was - right after I let him eat a huge slice pistachio-cream and raspberry cake. It was supposed to be cake to share, but he demolished it while I was chatting. That was a Euro5.75 slice of delicious cake!

He then had his first proper haircut (though I got told off by the hairdresser because we were late! How rude! It only took her ten minutes anyway!) I had previously purchased some car stickers in anticipation of tears (when I cut his hair there is always tears). 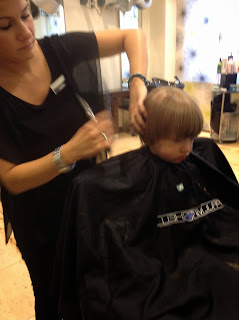 Still, despite the absence of drama, I proceeded to buy him a toy for being, "such a good boy". I idiotically used bribery where none was required.  Basically, I just wanted to be the hero and buy a toy helicopter.

Of course, after all that sugar and excitement, Henry refused any lunch and promptly fell asleep (to be fair, it was a blessing - an unexpected shopportunity!)

But then when he awoke, in a foul mood, I gave the little devil eat yogurt and a croissant as a snack to calm him down (by this stage I needed a coffee and sit-down after all my shopping).

We went directly from coffee to Legoland Discovery Centre. He was in heaven. (I was not. I tolerate soft-play style adventure zones if I can have a coffee and chat with a friend, but otherwise, I struggle). 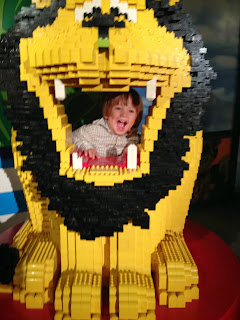 And then for dinner, Henry refused his potato soup - I was trying to trick him into eating a vegetable  -  instead he helped me with my pork knuckle and bread dumplings. Such a balanced diet he has!


What was worse, was that this was the performance at dinner; I think I'm getting way too laid back! 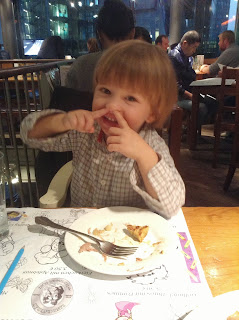