A typical Sunday in the Wolfers family (it usually ends in disaster).

Because it's Sunday, and in our family we really like to relax, today we decided to visit as many places in Hong Kong in one day as we possibly could, because we thought that would be super relaxing.

Well, that is a slight exaggeration, though it certainly like that is what we did.

We started at 6am. (I told you it was a busy day!) We headed to Tsuen Wan so I could do a 10km race. Entering a 10km race 3 weeks after a marathon, and after I've had the flu for a week was not the brightest idea I've ever had. It was very hot, and unsurprisingly, I suffered. Given the aforementioned marathon, combined with the fact I did my first Muay Thai class on Friday, now I am really, really sore.
Nonetheless, I did have fun (after it finished) and got some great prizes for 3rd place. What made it even better is my awesome running club buddies came 1st and 2nd. Way to go team! We cleaned up on the podium!
It was a bit of a downer waiting for more than hour for our oversized trophies - though it was even more of a downer for the spectators I suspect. I had one very cranky husband and son. I may have commented that sometimes it's the husband that requires the most 'management' in such trying circumstances, as opposed to the son. Afterall, it is dead easy to bribe a 2 year old, not so much his dad. However, it was great to have my loyal support crew there!

Next, my dear, sweet husband decided that today would be the day that we would finally buy curtains. Yes, after we had been out for alost 5 hours already (by this time it was almost 11am), in the boiling heat, we jumped in a taxi and headed, not to an air-conditioned mall, but to the fabric and haberdashery outdoor market in Sham Shui Po. Do recall I had just done a race, and hadn't showered. I was feeling pretty average by this stage. 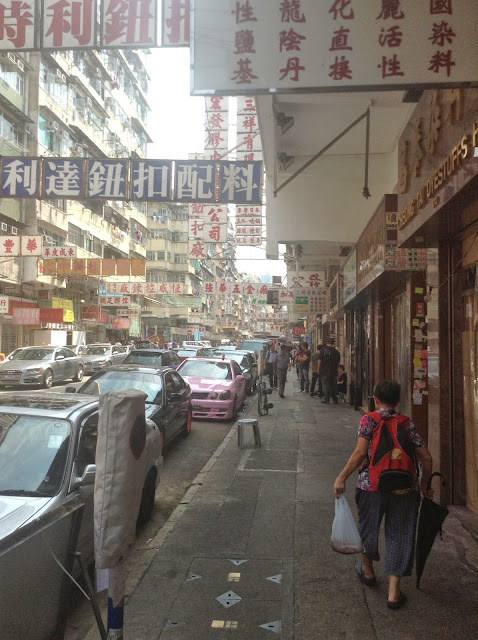 The best thing about this experience was that for the first time in about 5 years, I had a Big Mac. It was incredible! (Not great for the diet though).

The worst thing about this experience? Lets just say that wandering around, lost, in the heat, looking for a place that will make curtains is not a recipe for marital harmony. Quite the opposite. It makes going to Ikea seem like a date.
And so my genius of a husband, decided that rather than cutting our losses and aborting mission, that we would get in another taxi and go to a different place to look for curtains. This time in Mongkok.

This stop was more succesful, and I think it probably saved our marriage.


By this time we were obviously all very fed up, so we got in yet another taxi and went to Elements Shopping Mall in Kowloon. Here I had a vegan burrito (I'm sure it made up for the Maccas.) Henry shared some and, of course he got a mouthfull of chilli. Suffice to say, he was not happy.

Obviously, like the good parents that we are, we bought him a yogurt for lunch instead, after he had calmed down.

And so then finally, at Sunny Bay, we got on the very crowded bus headed back to Discovery Bay. We were very lucky as we were the last people able to board the bus.

Now we are doing this. We need it to take the edge off.
And Henry is watching his favourite Chinese Cartoon on Youtube by Alex Wilson. I also like watching it. I can understand it, and it's kind of funny. I'm not feeling guilty for TV babysitting my child either. He is working on his Chinese. It's educational!