Because I had mum guilt for spending so much time training, then racing, then sooking after the race because I was tired, yesterday I took Henry to do something that I knew he would like; we went to the Zoo!

If you are ever in Berlin, especially with kids, but even without, I highly recomend it. The grounds are beautiful and the animals kept in great condition. There are no big fences either, and so when we were looking at the giraffes, Henry asked me if he could "get in" with them. (I said no.)
There is also a great kids area to pat and feed the goats and sheep and donkeys. Unfortunately, we did not have the 10 Euro coin required to purchase food for the animals, but Henry did not let that stop him - he tried feeding the goats sand instead. Good try!

I then saw Haile Gerbrselassie wandering about, but I was too starstruck to ask for a photo. Idiot! I'm regretting that now.


After a couple of hours in the sunshine, my tired body had had enough, so Henry and I found a cosy looking cafe. It turned out to be attached to the Waldorf Astoria. I must say, one of the things that I like about being 32 as opposed to 22, is that if you accidentally find yourself at the Waldorf Astoria for lunch, you can think, "oh well, it's meant to be" and order a glass of wine and desert to to go with your lunch.

Henry thought it was pretty good, and it certainly took the edge off having sore legs! 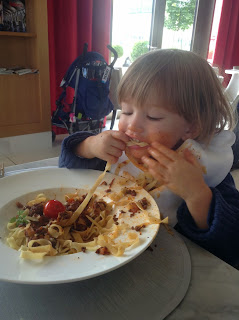