After an "eventful" flight during which my darling 2 year old son refused to either sit down or wear a seat belt during take-off, Henry and I have spent an eventful morning in HCMC.
I woke up, stressed, because my darling husband had recommended not to bring a stroller because it's not a very stroller friendly city.

Let me tell you, it's a city even less friendly towards mothers who have to carry their 2 year olds, because the mother can no longer take yet more screaming tantrums.

Further, given said child was born in Shanghai - another city unfriendly towards strollers, I'm not sure what I was thinking following his advice. I have experience with this!

(I sometimes wonder what I am doing wrong.... am I failing as a parent because my son won't walk more than 25 metres? Help! I need your suggestions on how to stop this! Ignoring the tantrums is not working, nor is "naughty-corner" time-outs. Is this just a phase? How do I stay sane?)

I guess the one plus that will come out of all of this is that I am going to end up with guns of steel!

Anyway, back to the adventure at hand.

We started off at the War Remnants museum. It's not entirely child-friendly as it includes some pretty heavy stuff. We did rush through some of the more upsetting photographic displays - for example  those involving Agent Orange. I did some Vietnam War study at university, and I really enjoyed it. I've also visited lots of other really sad memorials in other places - such as the Killing Fields in Cambodia. But somedays it's just too much to handle.

Nonetheless, Henry was unsurprisingly impressed by the planes and tanks. 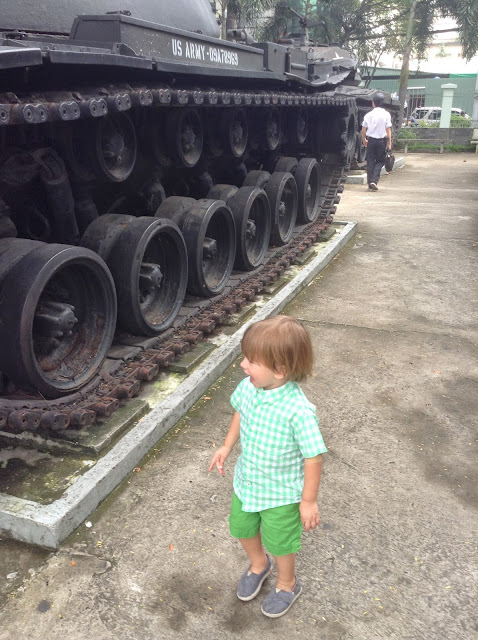 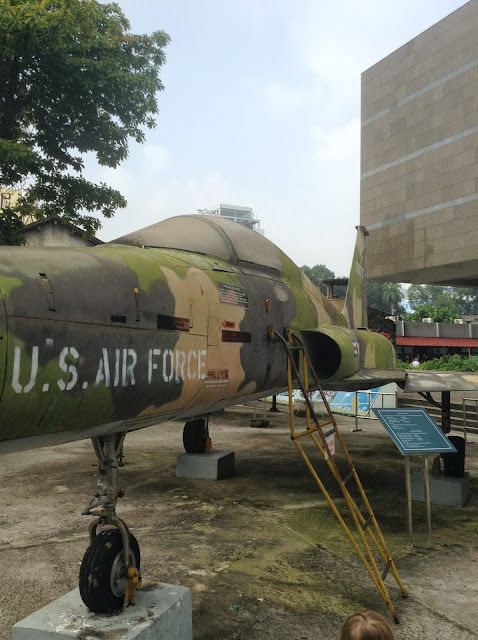 The Vietnamese tourists were impressed by him. The girls were lining up to take photos. 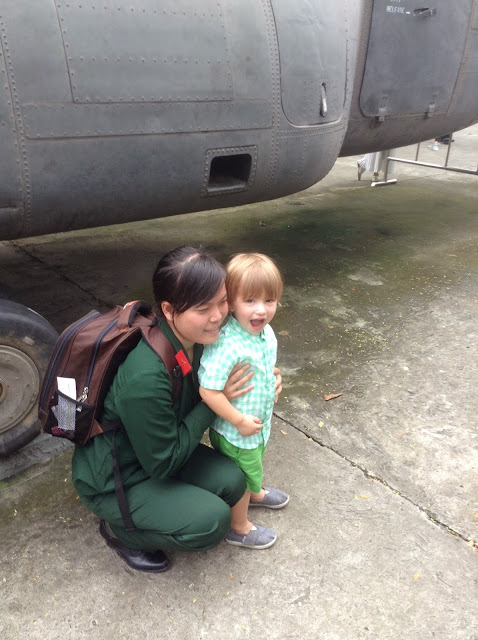 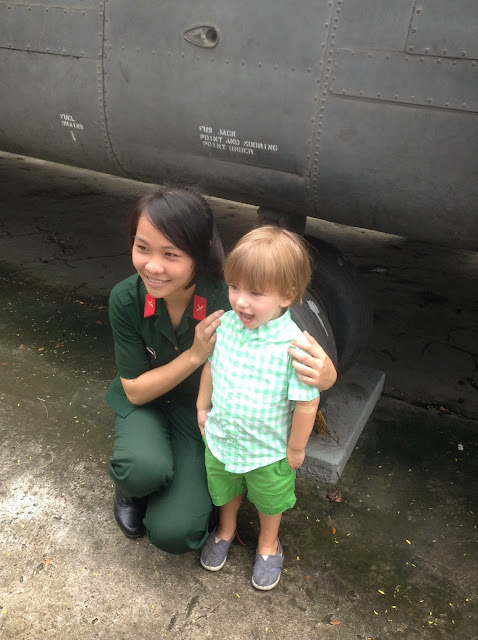 The next stop was the Reunification Palace. The famous site where the tanks crashed through the gates to end the war in 1975. 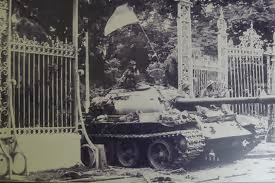 Before we went inside, my arms needed a little break, and so we indulged. I'm obsessed with Vietnamese coffee. Henry likes the ice-cream. 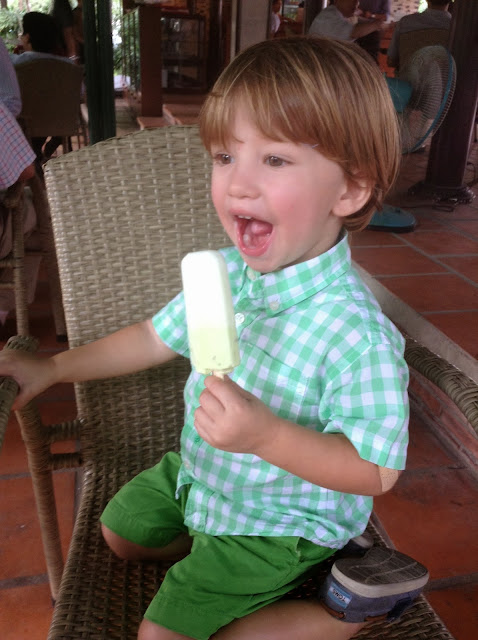 Once inside the Palace, Henry tried to escape into the roped off areas (obviously). Fortunately, all my speed training came in handy and I was able to grab him before he caused too much damage.
Henry was very impressed by this view. 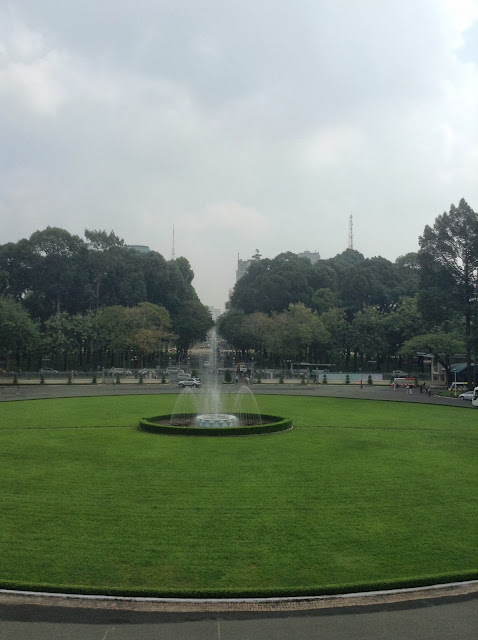 He was even more impressed by the elephants. I'm not sure why. But we stayed and played with the elephants for at least 20 minutes. 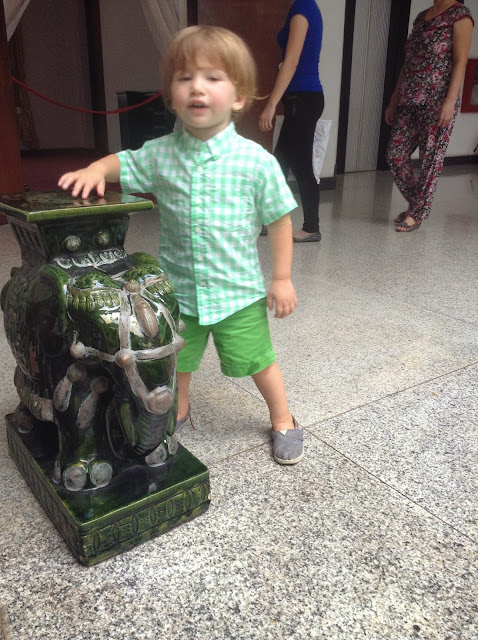 After a long morning, it was time to go in search of spaghetti. Once again suffering from a hatred of walking, this was what happened along the way. 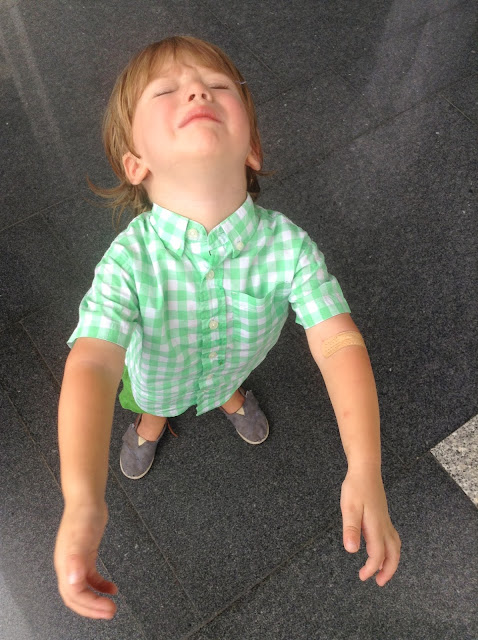