Ode to the treadmill

During my time as an expat, Lachlan, Henry and I have done a lot of travelling. I recently worked out that Henry had done roughly 25 long haul flights before he turned one! Crazy!

During this period, I've also done a lot of running.

The combination of travelling, as well as two years living in Shanghai's pollution, has resulted in a lot of treadmill time for me!

To start with, there are so many cities where even if you know where you are going, they are not great for joggers. Saigon, Sanya and Shanghai spring to mind. You've got a strong chance of being run over by a forklift, an earth mover or even a car on the footpath in any of these cities. I love running, but that's too much of sacrifice - even for me.

In Shanghai, I used to run on the treadmill 5 days per week, and then try to do my Sunday long run on the 393 meter track at Jiao Tong Unniversity. The reason for this is that usually by Sunday morning, the PM2.5 air quality monitor published hourly by the American Consulate, had dropped to below 150, i.e. "unhealthy for sensitive groups", as opposed to "unhealthy,", "very unhealthy", or even  "hazardous". (It's worth noting that the ratings in Shanghai are significantly more lenient than, for example, Hong Kong or Australia. In Australia a PM2.5 rating above 200 is deemed "hazardous", but it's not until it gets to 300 in Shanghai, that the air quality is deemed "hazardous".)

And so as I've continued to run, I've come to love running on a treadmill.

Indeed, I think treadmills get an undeservedly bad rap. To start with, I would not be the runner I am, or for that matter, the woman I am, without them!

I've had many great runs on a treadmill.

For example, the day I ran 35km is one that I will never forget. When I'm on the tready, I don't tend to watch tv; it was a long couple of hours! Afterwards, I just lay down on the floor beside the treadmill, unable to believe I'd actually finished.

I backed up the next week for 32km on that same machine. In fact,it was the same one that I ran on in the gym in our compound in Shanghai almost everyday. I loved that treadmill. When I moved to Hong Kong, I actually missed it. Running on the track, though great in a different way, is just not the same.

Our time in Vietnam was one of the first occasions in 6 months that I have actually run on a treadmill. Given how much time I used to spend on a treadmill, it seems hard to believe how long it's been.

It's because of my love affair with a good tready that I believe that those who say that the treadmill running is too boring are just yet to try hard enough.

A good treadmill can be a great friend (so long as it's correctly calibrated). After all, it's usually in an air-conditioned gym, with access to free water and possibly even a towel. You can pump some great tunes on your iPod, and just forget yourself as you focus on going faster. It's a major plus in my book that you are not likely to be run over, nor inhale tons of toxic chemicals, nor even have to dodge slow-walkers who manage to take up the entire foot path. You also don't need to worry about the weather, getting your shoes dirty, or that you will get lost.

Because I want to spread the love, I thought I'd share some of my favourite treadmill workouts with you. Try these, and then tell me it's too boring.

Note, all these workouts are done on an incline of 1.5 or higher. Though don't set the incline too high - you don't want to destroy your achilles!
Unless otherwise noted, you should have no longer than 1 minute between efforts.

Workout 1: 600s (This is adapted from one of my favourite track sessions that my old triathlon coach gave me.)
Warmup: 2km, 5x200m "pickups" - each one to be faster than the previous. You are trying to get your legs kicking over fast.
Main set: 5x600m; each 600 should be faster than the previous, and each time you do this workout, you are aiming to go just a little faster overall than last time.
Cool down: 2km
Total: 8km 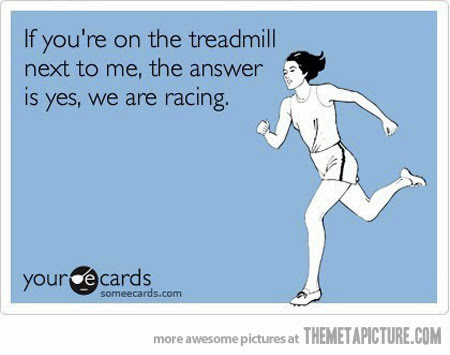 Possibly the best treadmill video ever, by "Ok Go" Here it goes again.