Does eating cheese give you nightmares?

Every time I come to France, I eat my weight in cheese. Well ok, I eat a lot of cheese. I can't seem to help myself. I go to the supermarket and there is just so much, delicious looking cheese, I can't help but buy it.
And then when I get home, I can't help but eat it. I feel guilty for being "wasteful" - I don't want to let the cheese just sit in the fridge all on its own. I can't exactly justify buying yet more cheese, unless I've eaten what I've already got. and so I take it upon myself to EAT. (I usually go home a kilo or two heavier, but I figure, as far as cheese goes, it's worth it.) 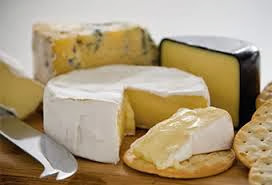 But now, despite it being past 6.30am and Henry is still asleep (!?), I am wide awake because I've been having really crazy, vivid dreams. (I dreamt I was in labour, but then I left the hospital because the contractions had slowed and I needed to get first to French class, and then get on a flight. I'm neither pregnant, taking French classes nor flying soon.)

And every time I come here and start eating cheese in copius amounts, I consistently have these crazy dreams.

Now the anecdotes of a sample size of one is not enough to prove the theory that cheese causes nightmares. The only "scientific study" I could find was by the British Cheese Board (I've finally found my calling - cheese taster!) whose inherent bias is to promote cheese. Still, they reported that eating different types of cheese before bed could cause certain types of dreams. For example, Stilton-eaters had the most bizarre dreams, people who ate Red Leicester dreamt about the past, and people who ate Cheddar were more likely to dream about celebrities. There was no real explanation as to why this should be the case.

However, research by the BBC suggests that tryptophan, an amino acid present in cheese, could actually cause strange dreams because tryptophan is used by the body to produce the mood stabiliser serotonin.

This could indeed be the cause of the "cheese effect".

In fact, there is an old class of antidepressants which prevents the breakdown of chemicals such as serotonin. These drugs also prevent the breakdown of tyramine, which occurs naturally in cheese.

However, the buildup of tyramine can cause serious health problems, and can ultimately prove fatal. So while they are not commonly prescribed now, people taking this type of antidepressant are given strict warnings to avoid cheese and other foods including cured or pickled products.

So there is a possible explanation for me as to whether eating cheese before bed causes strange dreams.

The alternate explanation for my crazy dreams could just be that eating large amounts of lard (well, fat) before bed causes indigestion, and subsequently disrupted sleep.

It's not entirely clear whether it's the cheese causing my dreams or not, however at this point I'm prepared to continue with the "experiment". If the cost of massive cheese consumption is strange dreams, then I'll suffer through!