After Monday's efforts, Lachlan and I thought it best to keep yesterday's "adventure" a little less ambitious.

I'm sure it will not surprise you to find out that this adventure involved eating mass quantities of food, though at a very reasonable price.

I'm sure it will also not surprise you that once again, it ended sub-optimally.
Yet another excellent thing about rural France is the prevalence of "workman's lunches". Apparently, the law requires that workmen are paid a Euro11.00 lunch loading. How civilised! This means that at almost all the restaurants offer a set menu priced between Euro 11- 12. It always involves 3-4 courses of food (entree / main / cheese and or dessert) and more often than not, wine and / or the Pear Cider that is typical of Normandy.

Yesterday, we went to Lachlan's favourite restaurant for a Euro11.50 lunch in Brece. He likes it because a) there are masses of delicious food, b) it is very French and few English speakers attend. I think he feels tres sophisticated.

In fact, when we arrived, every single eye in the restaurant was turned on us. Clearly, everyone else is a regular. I imagine it is unusual to have out-of-towners, after-all we were in Brece which is in the middle of NOWHERE. 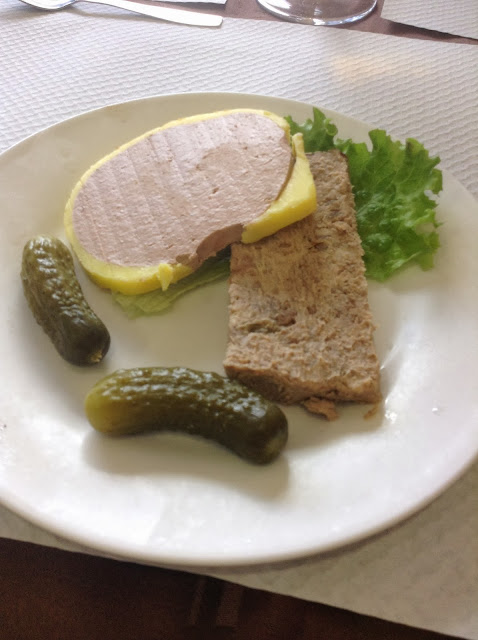 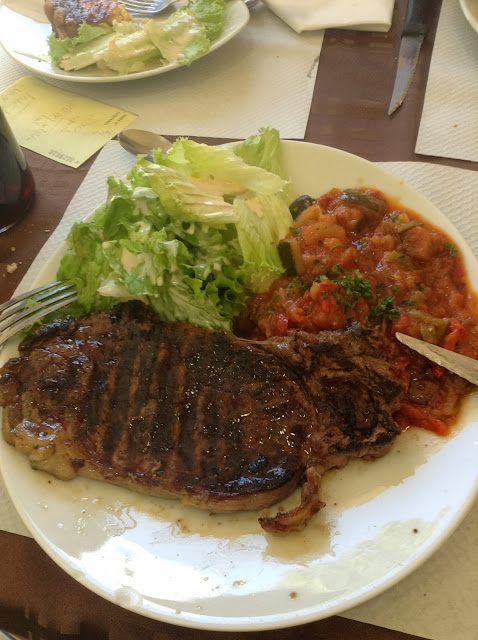 The meal started out well. As promised, delicious food was delivered.

Despite Henry refusing to eat (again), he was kept entertained by the restaurant's resident dog. So things were going along relatively peacefully.

That was until Lachlan convinced Henry to eat some steak (Henry will eat white food and meat protein).

However, on his second mouthful, Henry vomited everywhere; on the floor, the chair, all over himself. Tres embarrassing. (Rather than help clean up, Lachlan was exceptionally quick to offer to grab the wet-wipes from the car. I was left mopping the floor with table serviettes.)

The one saving grace was that because we were eating a little late, the restaurant staff seemed not to notice. So I could deal with the situation without everyone staring or causing to much fuss.

But then after this little incident, Henry seemed pretty fine. Happy and well even.

And so Lachlan decided that it would be ok to let him eat some camembert. I felt this to be unwise, but I had basically given up by this point.

When we left the restaurant I felt so bad. I'd done my best to clean the vomit, but it still smelt. What made it worse was that the chef and his girlfriend came out to meet us because they had been to Australia and we are Australian. That was slightly awkward as they spoke no English and we speak no French. Lots of smiling instead.

And then they didn't charge us for Henry's food! If he vomits everywhere we should at least pay for it! Especially with the lingering smell.
So embarrassing.

Nonetheless, because Henry seemed fully recovered, we decided that we would continue on our adventure - so long as we bought him clean clothes at the supermarket. (The poor kid stank).

I got him the best outfit ever. (I use "best" in the loosest possible sense of the word.) What I actually mean is that his new threads were totally gross, but totally French.

I made him pose in the car-park. He thought he looked great - especially with his new hat.

After getting changed and having the photos, the outing fizzled somewhat.

But on the balance despite the embarrassment, it was a worthwhile outing - if just for the reason that Henry got to dress up like a petit garcon.