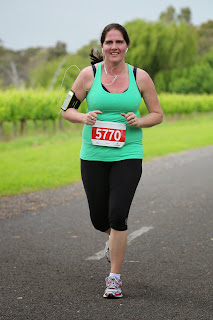 I'd like to introduce the first in my new series, Inspirational Women Who Run.
I'll be featuring an amazing line-up of women. They are mothers, workers, adventurers, over-achievers and runners. All of them have a unique story, and are totally inspiring!

To kick-start the series, I'd like to introduce Kate Gray. I'm totally inspired by Kate, because through running, she has achieved things she never thought possible. She's done all this while balancing being a mum, wife and career woman. And she has done it all with grace and humility.

Can you tell me a little bit about yourself?
I am 37, live in Adelaide and have been married for 15 years. We have two lovely daughters Bella who is 10 and Indi who is 7. I work in the commercial property sector as an Associate Director of Research for Colliers International. I love food and entertaining, reading, running (obviously!), and sewing.

How did you get into running?
I started running in 2009 after I had my children. I put on a lot of weight and was feeling really awful about myself so I decided I need to do something. That something I decided was to run a half marathon. I had a bit of a history of setting a goal and not following though, and I was determined that this time would be different. I decided to do an event outside the state so there was a lot more at stake – I had to book a ticket and accommodation so I was less likely to chicken out because I was scared of failing. The Sydney half marathon was the event I picked. So I booked a ticket and started training. My husband was running at the time and we would do the long runs together with him jogging and me struggling to keep up. I got to Sydney and during the event at 16kms I knew that I was going to make it – the best feeling ever! Crossing the finish line was a very emotional experience as I had planned, trained and made it.

Are you training for anything right now?
I ran a 10km race in mid October and at this stage I have not planned the next event, but I think that it is probably going to be another 10km race early next year. I have had a few niggling injuries and would like to let them settle down before the next event.

Do you have a favourite race, or favorite run that you would like to tell me about, or any other memorable running experience that you would like to share?
I think that the first race the Sydney half marathon was the most memorable. There were the nerves about if you are going to make it – it is such a long way. I was lucky to have both my husband and some experienced running friends (Lachlan and Jane!) that gave me the confidence that I could do it! Although I have not had too many mishaps I do remember a great dane in a front yard seeing me coming for a second I thought he was going to leap over the fence and bowl me over. Scared the bejesus out of me. Needless to say I ran a different route after that. Also I am a bit accident prone and just a bit clumsy and it is embarrassing to admit, but I have fallen off a treadmill (in front of an audience at the gym!) while I was doing sprints training. Hugely embarrassing hitting the wall behind the treadmill, but only a couple of bruises and a very bruised ego and a healthy respect for treadmills was the result!
What motivates you to run?
I enjoy running, but to really push myself I found that a race is a really good way to motivate me. I didn’t set another goal after I run my first half in 2009 and it took me until 2013 to run my second half marathon. After the second half I set another goal and I think that this gives me a focus and purpose to go and do the training. I stopped running for a period after the first half and it was not until I reached a very stressful period at work and I had to do something about my weight that I decided to go back to running. It is something that makes me a better and stronger person. Although I have gone through patches where I don’t run much, I think now it is part of my life and I am better for it. I want to aim to do a couple of races a year. Some of my friends are much faster than me and run full marathons. It is about having someone to inspire you to the next thing that also motivates me – not being competitive, but having someone saying to you that you can do it or that they will do the event with you both motivates me and makes me want to do better.

Do you have an overall goal or dream that you would like to achieve with your running?
I have thought a lot about why I want to run and it is more about enjoying it. Although I want to improve, I also don’t want to put myself under too much pressure that it doesn’t become enjoyable. I have recently done some trail running, which are a bit slower because of the hills, but it is so beautiful being out in the bush. I am going to try a couple of shorter trail races and see how I go.

What do you love about running?
It is time for me to zone out listen to some music (I have really bad taste in music so I don’t need to inflict it on my family!). I am sure people driving past must think I am completely nuts as I find myself singing along as I run. I love running when you are feeling great and it feels like there are wings on your shoes. I love trails and getting to the top of a hill and looking back where you have come and the view from the top it is fantastic!

Is there anything that you hate about running?
The first two kms! In my experience they always hurt. Once I am past that I can keep going. Also hate the injuries, but I have learnt to deal with them by mixing up the training, running less and using other training to keep fit while I recover. It is about finding the right balance.

Apart from running, I know that you are an amazing chef. Do you have a favorite pre-race meal?
Food is something I completely love, but with a busy life I have tried to keep it simple. Pre race I would have a smoothie – banana, almond milk, protein powder, cacoa powder and chia seeds – a pimped up choc milk! Also a couple of pieces of toast – I have discovered rye sourdough with either the old fav of vegemite or if organized avocado.

How do you balance motherhood and work and still make time to go for a run?
It is always a battle to fit everything in, but I find that it is about scheduling things in. What works for me is a 6am gym session or run, which I aim for at least 3 sessions during the week, and try to do a run on the weekends (which doesn’t always work out!). As 6am  is a time that both the kids and my husband are still asleep I don’t feel like they are missing out on me, but I do lay out my clothes the night before so there are no excuses when the alarm goes at 5.45! My husband is a mad keen cyclist and does quite a bit of training on the weekends and at night, but he is not a morning person so the mornings are a time I know I can count on – I just need to get up! Also as the kids have got older I have learnt not to feel guilty about leaving them to go and do some exercise – I hope that it sets a good example for them. My 10 year old said she wanted to do a 5km race next year and I am going to encourage her to do it and hopefully instill in her at a young age the love of running that I have only found in my mid thirties.

What have you learnt from being a runner? 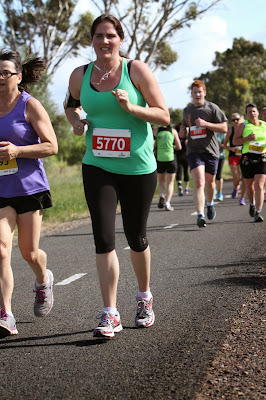 There are a lot of things that running has taught me. I am much mentally stronger than I thought possible and how powerful telling yourself that you CAN do it is. It has also taught me that if you set your mind to something and go after it then you can achieve great things. I have also learnt that there are always going to be people who are better than you and that is something I am willing to accept, but getting in the game participating and setting and achieving your own goals is what is important. Someone told me in passing that I was an A type personality (not something that I thought of myself!). It was said in the context of making significant changes to both my diet and exercise and taking advice and when I thought about it running has done that. It has made me make a whole lot of small changes which over time have become significant changes and it was essentially setting a goal of running my second half marathon which was the catalyst to all of this.

And what is the thing that you are most proud off – both in running and more generally?
Completing my second half marathon was an awesome achievement. This time I did all of the training and entered and ran the race by myself. I also improved on my last time! As with some things the day before was a good friends 40th birthday and all the friends that were going to do the race piked out.  I drank very little, but we had pizza – not recommended the night before a race! I got stomach cramps at 16kms to go, but I was completely determined to finish and I did, but lost quite a bit of time in the last 5 kms.
Posted by Jane at 08:25