For Halloween last week the kids were allowed to wear costumes to school. I was a bit nervous that Henry's bee costume wouldn't fit, or that he wouldn't go for it. But he loved it!
Take a look. 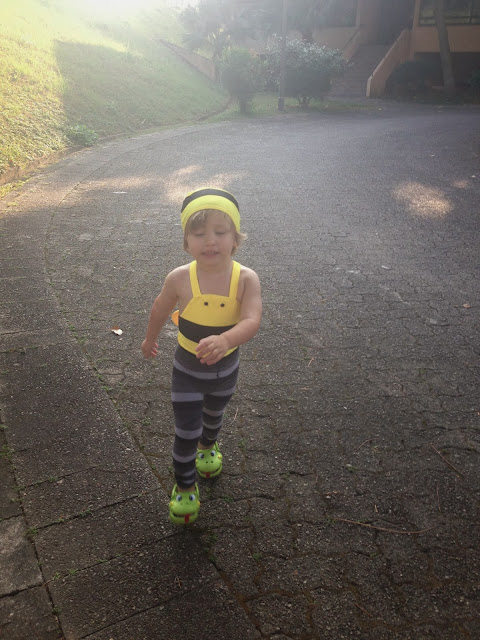 He loved his costume, though was dead-set against having his photo taken. 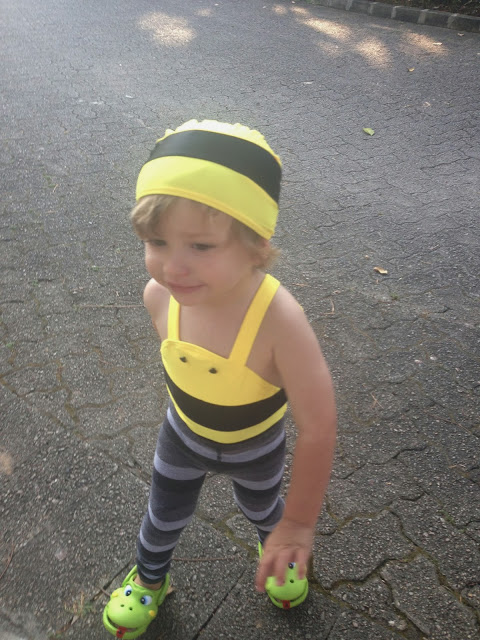 Check out his new froggy shoes! He won't take them off, even wearing them with his pyjamas. 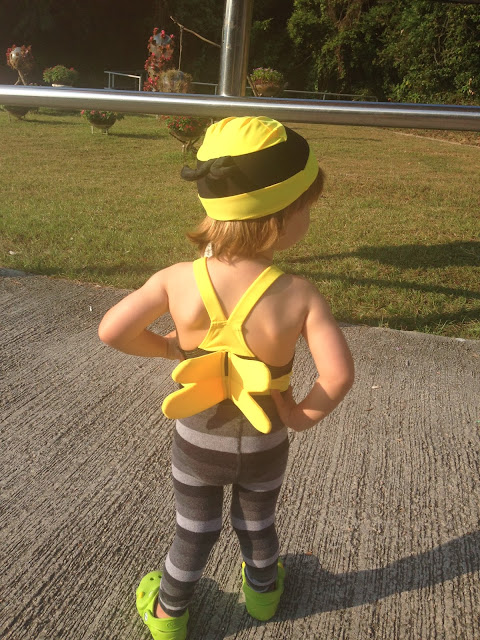 Love those chunky little legs waiting for the school bus. We practiced "buzzing" for when he saw his teacher, Miss Nathalie. He did buzz at her too! 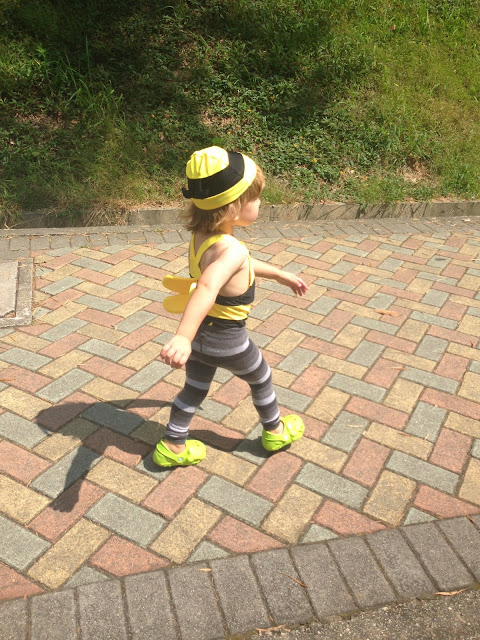 Love the strut he has going. 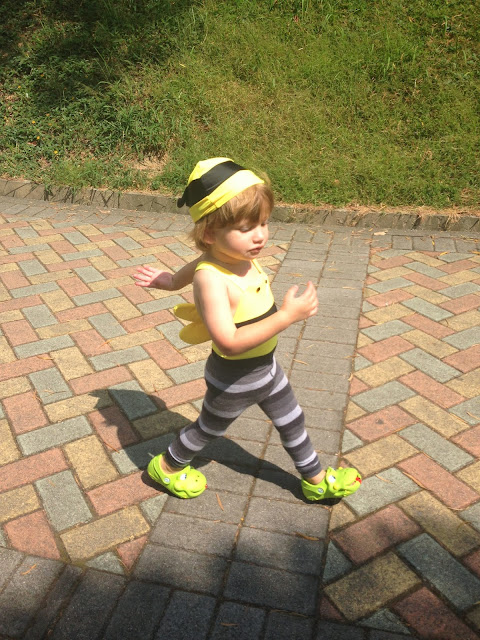 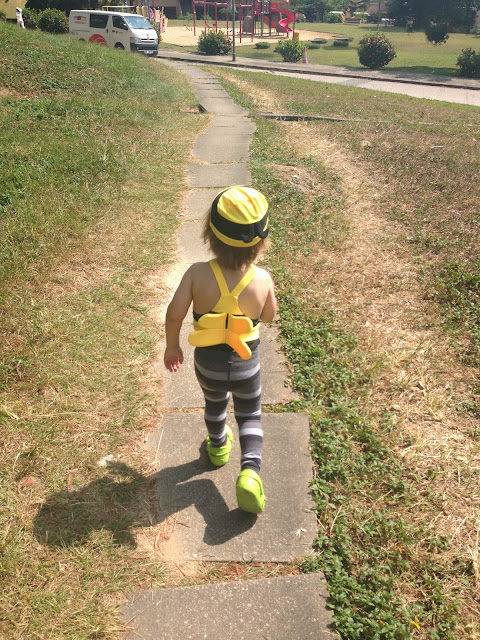 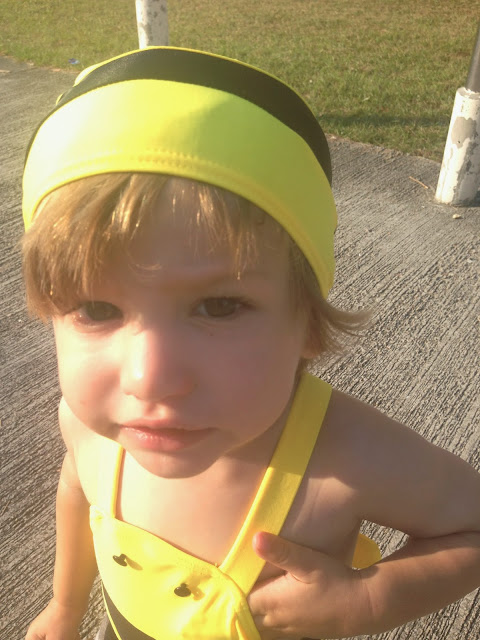 I was inspired by this costume at Oh Happy Day! and being the awesome mum I am (haha) I decided that Henry and I would attempt making our own aeroplane. Not for Halloween exactly, but because it's fun to dress up. This is what happened.
Here is Henry, brushing his hair with the paintbrushes. He didn't quite get it, and later got cross when I took the brushes away. 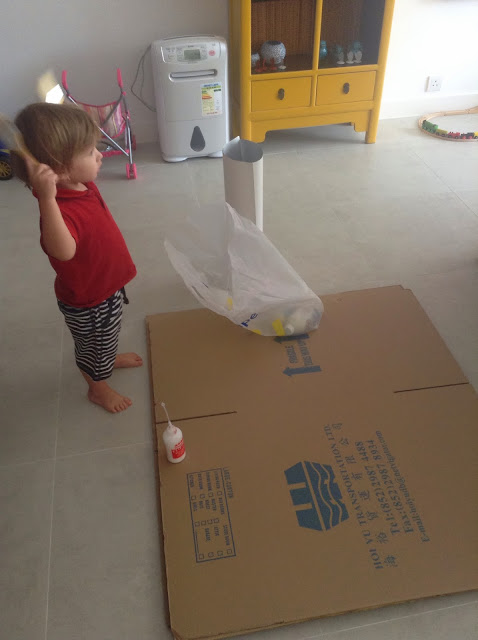 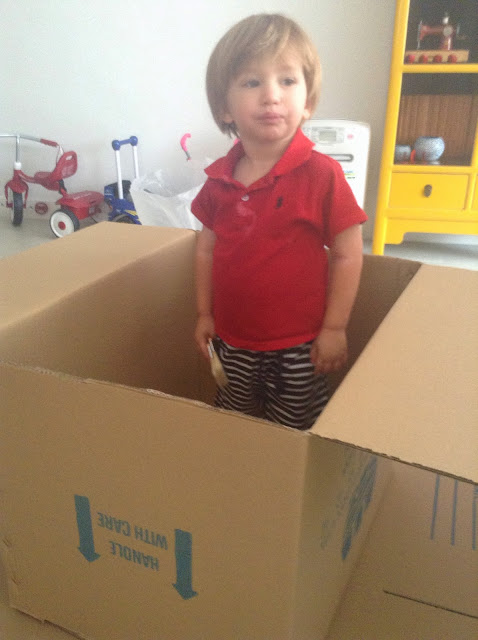 During the construction phase, the main issue  was that once Henry was in the box, (we needed to measure a henry-sized gap) he refused point blank to get out. This ended in tears. 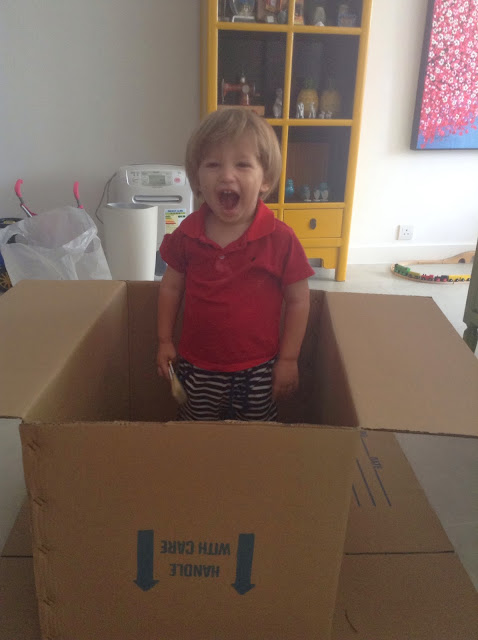 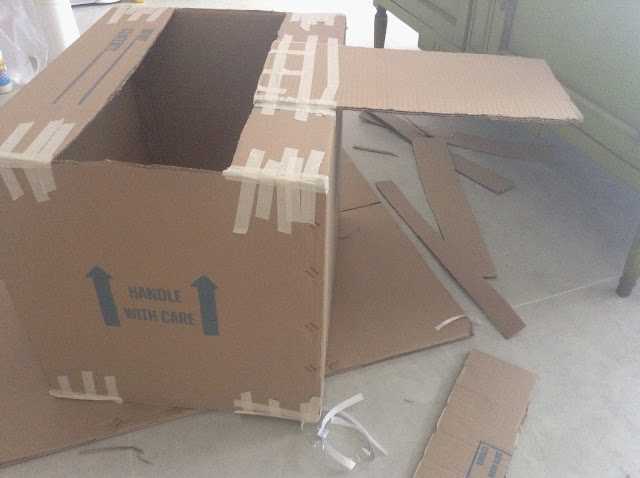 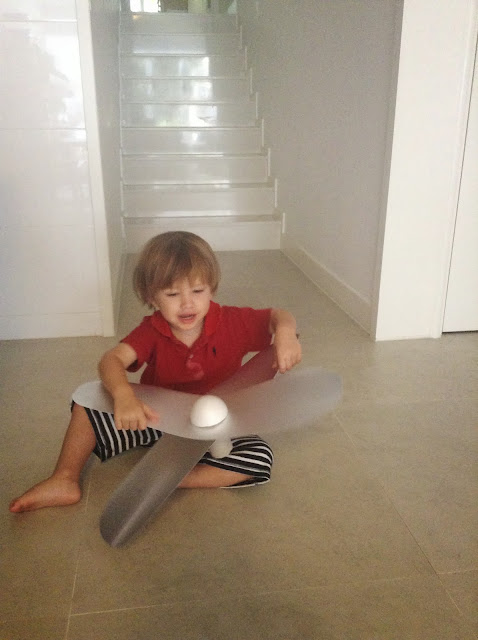 Next is was time to paint. 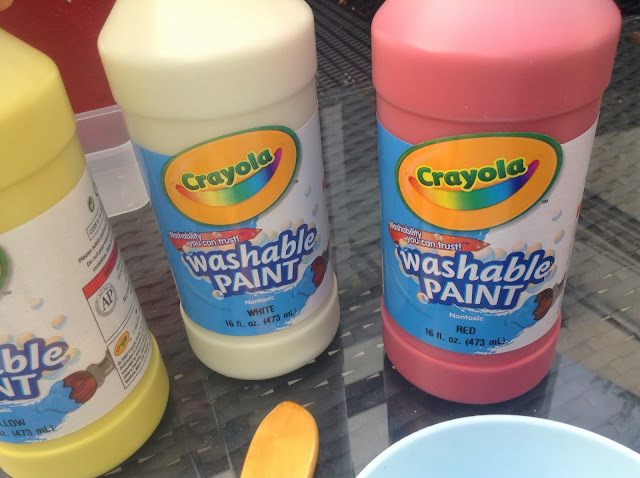 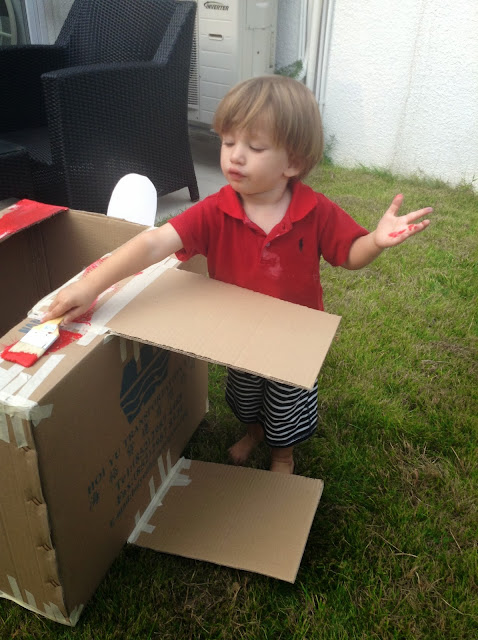 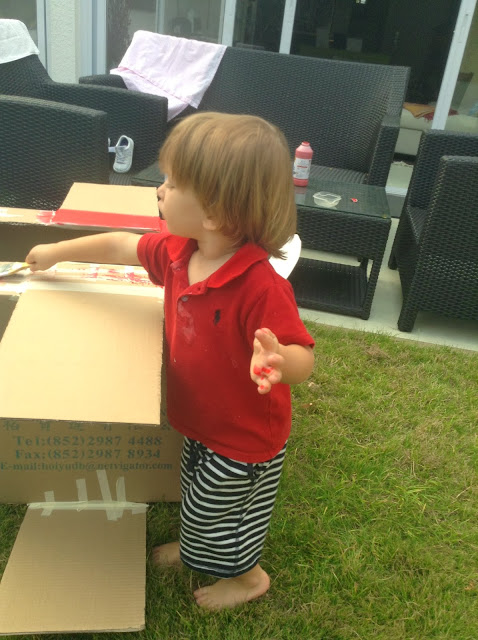 Henry loved the painting. We were doing really well until somebody pressed too hard on the wings and so they got bent. By this stage we had been crafting for some time, and mummy was getting a little impatient. This broken wing did not go down well. However, I kept trying to remind myself that we were doing this together, and that it didn't matter really. The whole point was to do some craft, not make a perfect costume.
In the end three of the four wings got bent, so maybe it wasn't entirely Henry's fault. I'm prepared to put it down to a design fault (that I and because I couldn't be bothered to follow the instructions properly). 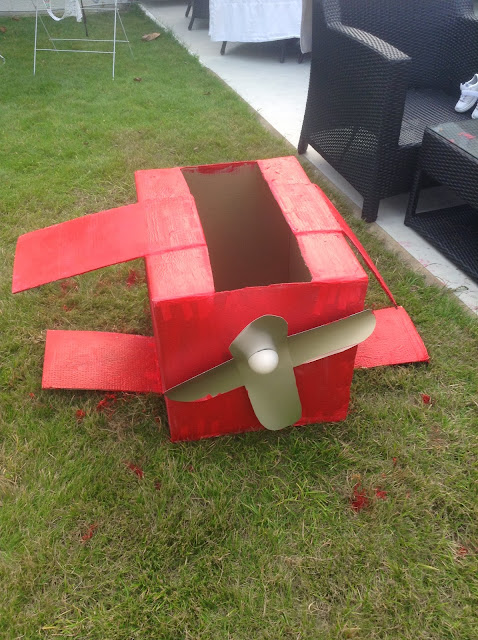 Notice the red paint in his hair. That stayed there when he went to preschool the next day. Oops!
Here he is counting the paint bottles. I was trying to distract him from emptying the entire bottle of paint. 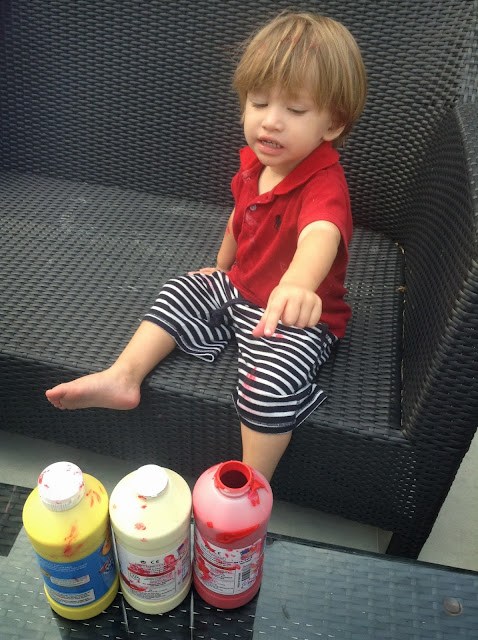 In order to try and fix the problem of the floppy wings, we stuck some rulers to the top of the wings. Then this snazzy design team painted them yellow in order to try both camouflage the ruler issue, and most importantly, to make the plane look fast. 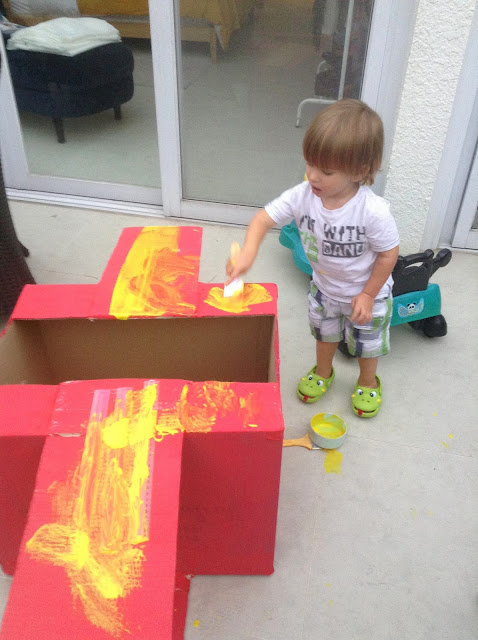 I love the concentration on his face. He was having a great time. 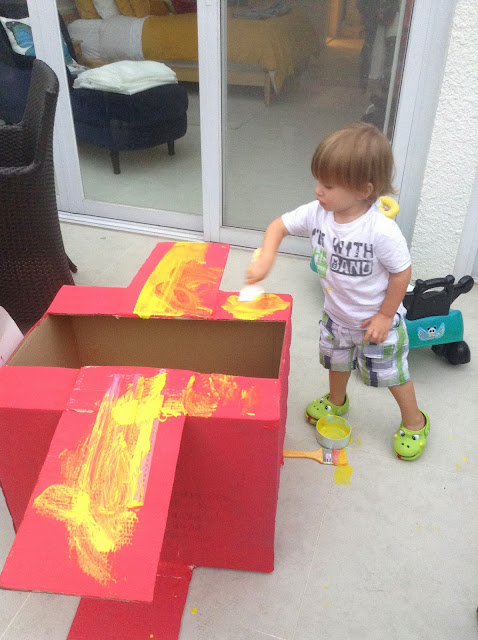 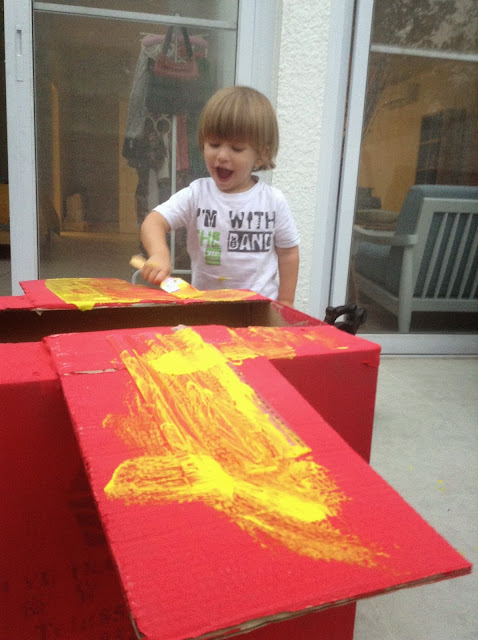 The problem of the wings seemed to be solved. The aeroplane was not looking too bad! (Though it was still a little too heavy for him to lift.) 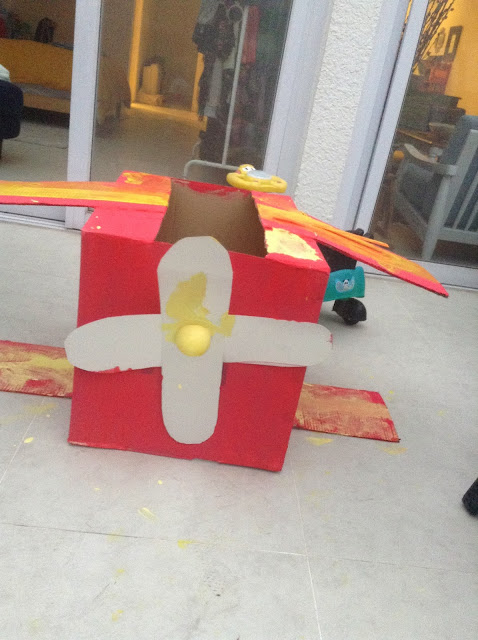 That was until the next morning. The wing had flopped down again, while the rulers stuck out in the air. Plane crash! 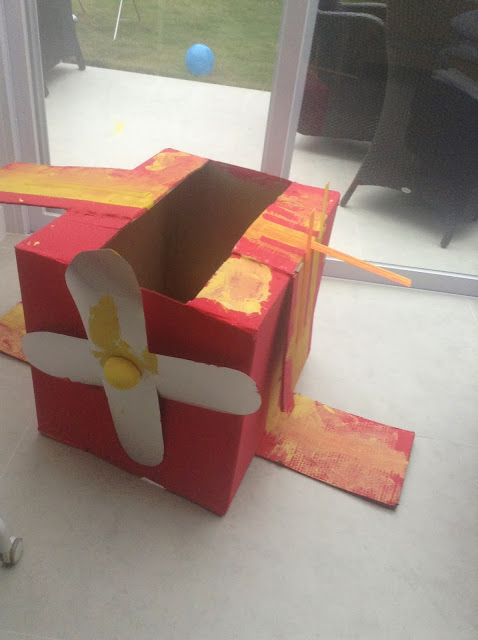