As an expat, I often feel that I should get out and experience all the great things that Hong Kong has to offer. Indeed, one of my favourite things about Hong Kong is that it is so diverse; before we moved, a friend told me that you could do and try everything you want here, albeit on a smaller scale. There are so many more opportunities and adventures to be had than if you'd just stayed at home.
So far this experience for me has proved to be true.
Nonetheless, it is still rather easy to slip into a routine and never get outside of that.
And so, Henry and I have developed the concept of "Adventure Days!"
We even have a song that we sing when we are getting ready for the aforementioned events;

And so yesterday was Adventure Day to Peng Chau.

We were both very excited to catch the "other ferry" as Henry calls it. It takes about 10 minutes from Discovery Bay. But be aware, it left about 5 minutes earlier than scheduled! It was lucky we arrived early!

As far as adventure days go, it was fun and interesting. Here are some of the highlights;

1. Waiting for the "other ferry"; my first mum fail of the day. Right after I took this photo, Henry fell off the pylon he was balancing on, and hit the cement. He wasn't so happy.
You can see the "other ferry" coming into dock. With its open engine room, and open deck, it certainly has much more of a "adventuring" feel. Definitely made us feel much more intrepid and that we were branching out into the unknown! 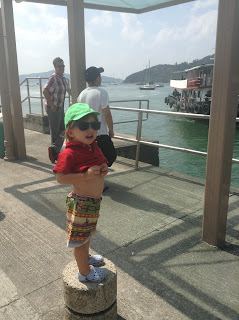 2.  Mum fail #2; Shortly after this photo, I allowed Henry to kneel up on the seats and look out over the water, mainly in order to get a good photo. He could potentially have fallen in (though probably not). In my head, I was telling myself that I still remembered enough from my Bronze medallion training when I was 16, should my skills be required - trying to justify my actions.
I'm sure it was karma. There were no good photos, but at least he didn't fall. 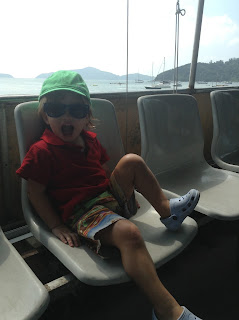 3. The next highlight was when Henry went up to this bird, and said "Pleased to meet you!" Then blew it a kiss and put his arms out for a cuddle. 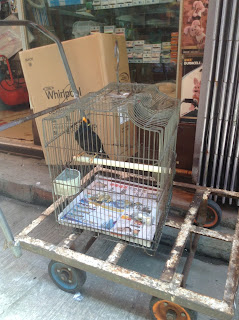 4. Peng Chau certainly felt a lot more classic "Chinese" (Adventure Day success!); it had little winding streets with power-lines everywhere, and shops selling plastic junk. However, it was without the chaos of the mainland, and the fish market was indoors and the fish were kept refrigerated! Refrigerating raw meat is not otherwise a particularly Chinese concept. 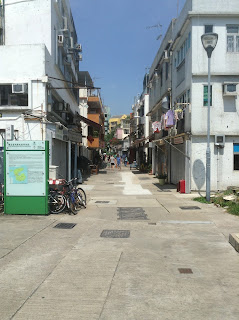 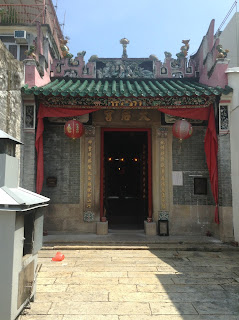 5. We almost had lunch at this restaurant; This is clearly what I've been missing my whole life! 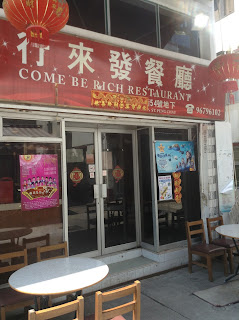 6. The final mum fail of the day, was during lunch. Of course we had to eat dim sum and it was pretty good, and super cheap. However, obviously I did not blow enough on the steaming hot dumplings that my starving child put whole into his mouth. Of course he screamed.
There was a lovely old Chinese lady that kept giving us tissues, showed Henry how to use a toothpick to stab his dumpling, and even went and found a fork for him. During the hot dumpling debacle, she suggested that the cure for a burnt mouth was to eat sugar. And so it came about that the restauranteur presented us with a bowl of sugar for Henry to consume. The crying stopped very quickly after Henry starting licking straight sugar from my chopsticks. Fail! 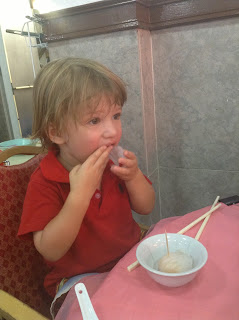 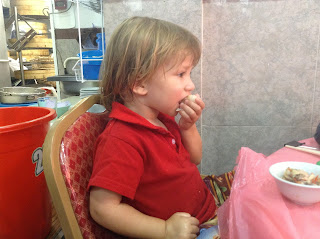 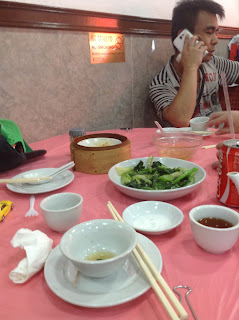 Note, in the last photo, you can see the white bowl in the middle of the other dishes. That is the sugar bowl. I do not recommend feeding it straight to your toddler in order to be polite to kind strangers. It DOES NOT make for a GREAT trip home!

For more on HK style adventures; 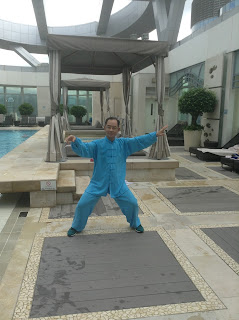